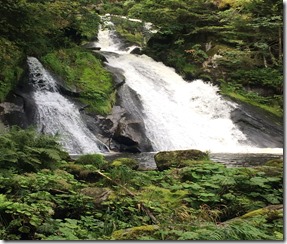 When the great theologian Jonathan Edwards was 18 he had a fascinating experience- it may well have been the moment when he became a Christian. He had come across the description of God in 1 Timothy 1:17- the King eternal, immortal, invisible, the only wise God. He thought to himself- “how excellent a Being that was, and how happy I should be, if I might enjoy that God, and be rapt up to him in heaven, and be as it were swallowed up in him for ever!”  In other words, Edwards was simply attracted by the beauty and greatness of God.

I’m not sure we present the Gospel like that very often. We tend to focus on the peril that we are in without Christ and the potential blessings of forgiveness, victory over death and so on that are available to us. However, I was reminded of Edwards’ experience when teaching through the end of John recently on the Mountain Bible School.

I posted recently some of my reflections on the week- the helpful reminder of the privileges that we have as Christians. But two weeks on (astonishingly the cuckoo clock still hasn’t been muted!) I am perhaps struck more powerfully by another recurring theme. John’s portrayal of Jesus is gloriously attractive. Not only is Jesus the rightful King: He is the King for which we all long. Let me pick up four pictures that John gives us.

“Jesus knew that the Father had put all things under his power, and that he had come from God and was returning to God…” (John 13:3) I wonder how you would naturally finish that sentence. Jesus knew that He had power and was returning to God so He performed a dramatic miracle? Jesus knew that He had power and was returning to God so He demanded that everybody fall at His feet? Both of those would be perfectly logical. But it is not where John goes: “…so he got up from the meal, took off his outer clothing and wrapped a towel round his waist.” (John 13:4). I know it is familiar ground but is not the washing of the disciples’ feet simply amazing? Jesus knows His authority and yet chooses to take on the most lowly of tasks. And think about the night when He did it. He knew this was the night before His most agonising death. Who would have blamed Him had He been self-absorbed that evening? Would it have been objectionable for Him to ask the disciples to serve Him that evening? But no- the great King takes on a degrading role to ensure that His disciples are clean. He would do that in an even greater way just a few hours later. He is the ultimate example of humility. After His resurrection He would cook breakfast for a group of disciples who had abandoned Him. I cannot say how thankful I am that the One in charge of the universe and the ultimate judge of the world is exactly like Jesus. He really is attractive.

There are a couple of interesting phrases that Jesus uses when on trial that I had not noticed before. He says this to the high priest- “I have spoken openly to the world…I said nothing in secret.”  (John 18:20) To Pilate He made this observation: “The reason I was born and came into the world is to testify to the truth.” (John 18:37).

One of my observations from recent political turmoil is that people increasingly value authenticity. There is a desire to know what politicians actually think rather than what focus groups and discussions behind closed doors have led politicians to say in order to please the public. Well Jesus is the ultimately authentic leader. He is open about His identity, clear about the evil that is in the world and our hearts and wonderfully open about the peace that He brings. There is no hidden darkness in Jesus where evil lurks. No- it is all out in the open and it is all light. Wouldn’t it be great to belong to a King like that? Praise God we can.

One of the illustrations I use most (and I did so again in Germany!) is that of the Copernican Revolution. The call for the Christian is to get ourselves out of the centre of our universe and recognise that God is there. It is both right and for our good because we are made to have God centre stage. However, let’s be honest, we so often struggle to live that out.

Yet Jesus managed it perfectly. It is evident that Jesus heads towards the cross out of a God-centred loyalty to His Father’s will. Jesus teaches that the Cross is evidence that he loves the Father and does exactly what his Father commanded him. (John 14:31). On that night He prays for the glory of God- “Glorify your Son, that your Son may glorify you.” (John 17:1).

I noted on the Bible School that I have come to loathe sentimental nonsense about Jesus thinking of me above all as He went to the Cross. He was very definitely thinking about the glory of the Father. And that is good news because it means that Jesus is no idolater. He is the perfect human being in realising the utter centrality, greatness and glory of God. That should be deeply attractive.

The King on His throne

There is much that could be said about what Jesus does on the cross. The group in Germany found Jesus’ words to his mother and John deeply moving as essentially from the cross He founds a whole new family- a move that was deeply symbolic of what the church would become.

But there is another image that always moves me. Pilate prepares a notice- “Jesus of Nazareth, the King of the Jews.” It is displayed in all the major languages of the day- Aramaic, Latin and Greek. Essentially this was a fulfilment of John 12:32- “I, when I am lifted up from the earth, will draw all people to myself.”

An ancient King didn’t visit people. He summoned them to His throne. And here you have King Jesus summoning people to His throne. His credentials as King are advertised in Aramaic, Greek and Latin. And yet the throne from which He reigns is a cross.

Many of us have seen the pictures of the Queen travelling through the streets of London in a golden carriage as she travelled to her coronation in 1953. Well see a young man carrying a cross through Jerusalem and realise that astonishingly He was heading to His coronation.

A King who reigns from the ugliness of the cross. You can see why CS Lewis described Christianity as “uninventable.” But it begs the question. What are you going to do with His summons? As I consider His humility and openness, as I reflect on the fact that He is the leader we long for deep down then only one answer seems appropriate. I want to go to His throne and bow low before it for, as Edwards knew, He is a glorious King and it is the greatest privilege in the world to be rapt up in Him.