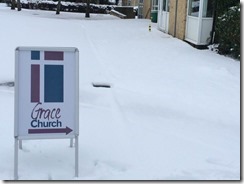 This Sunday represents a year since the first meeting of Grace Church Kidlington. We had a staggered start- three weeks of not very visible services in September to make sure we knew what we were doing before a public launch at the beginning of October. However, the events of this coming Sunday make this an appropriate time to look back.

The first Sunday was, in one sense, the end of a process. For around a couple of years Woodstock Road Baptist had been wondering how to make the best of a growing congregation. We realised that if pins on a map had marked the location of all those attending WRBC, Kidlington would have been the area with the largest concentration of pins. Furthermore, members in Kidlington had friendships with people in the village and it felt more natural to invite them to a local church. These realities led to a year of prayer and investigation as we pondered the question- was the Lord opening the door for us to plant in Kidlington?

We concluded that He was- and we have now been meeting at 4.00pm on a Sunday in Gosford Hill School (as well as holding midweek meetings in homes) for a year. It has been a good year. There is more we can do and certainly space for growth- but there has been much that is positive. We are certainly bigger than the (roughly) 15 adults and 10 young people who started out. Looking back I am thankful for three things in particular.

The week before we started still remains vivid in my memory. I happened to be preaching at the Oxford Chinese Christian Church on the Sunday afternoon. I apologised that I would have to leave swiftly after the service in order to attend our final prayer meeting in Kidlington before the start. This led to the Chinese Church holding a prayer time in groups where Grace Church Kidlington was prayed for in at least four different languages. It was very moving.

This was typical of the support we have received. Many people around the country have asked after GCK with interest. We are delighted to have been recognised as a church plant by the Fellowship of Evangelical Churches. I was immensely grateful for the warmth of welcome that I received from other churches in Kidlington, particularly the pastors of Kidlington Baptist Church and Lifehouse Community Church. Lots of people in different places have been praying for which we are very grateful.

I should have expected this but it has caught me by surprise- church planting really is an emotional roller coaster. Overall we have grown and it has been fantastic to get to know people we would never have met had we simply stayed in Woodstock Road. But the gatherings on Sunday and midweek evenings do fluctuate. There are some Sundays where I am thrilled at all that is happening and others that feel a bit empty (though snow doesn’t help…) and you are tempted to wonder if it is going to end in disappointment.

In my more stable moments I recognise two things. Firstly, that church planting is a long work requiring perseverance. Secondly, I am learning to hold on to the promises of Jesus. “I will build my church,” He says. The Kingdom of God will grow to be the biggest tree in the field. Considering He first said those things to a small group of disciples in a back water of the Roman Empire, it is not unreasonable to say that they have come true. Now of course those statements are not a guarantee that every individual church plant will grow. But they are enough to give a general sense of optimism. Above all they give us an assurance that this is not simply about what we can do. We are looking for the Lord to build His church.

During the period when we were discerning whether the Lord was opening the door for us, we were essentially looking to see what He would provide. There was (and has continued to be) financial provision. It became clear that Gosford Hill School would be an ideal venue- and they have been tremendously helpful. But the biggest question in our minds was this- had the Lord provided the people who could make this viable? Were there enough individuals committed to serving such that no one individual would be burnt out?

The last year has provided a wonderful “yes” to that question. It has been a treat to work alongside such a committed team- with different people covering the main tasks to make a church welcoming and accessible. Those who have joined the church in the past year have added to the team. We rejoice to be a team that covers three generations. It was a wonderful provision that our first year co-incided with Steve Titterton’s final year as trainee: it would have been very difficult without him. And now we are thrilled by the latest piece of provision. On Monday, Phil Butcher started as one of the pastors of WRBC- but with his chief work being the leadership of GCK. This is a huge answer to prayer because there are still challenges ahead. We have had encouraging services where people have joined us- but we would love to find other ways of engaging the village. Currently GCK remains a part of WRBC but that won’t be a sustainable model forever- there will need to be a move towards independence.

So there is much ahead of us to be done but a first anniversary provides an opportunity for thanksgiving. The Lord has been good to us.