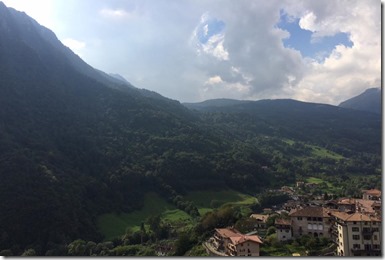 One of the things I enjoy doing most is preaching less familiar books of the Bible. Often this enables people to encounter God in a fresh way as they hear words that they have not heard before. Preaching Song of Songs over the year has given me that experience and the more recent joy has been working on Zechariah for Woody Road and then  the Alpine Bible School. There were two things that particularly struck me when teaching through Zechariah on an Italian mountain recently.

Zechariah 3- the voice of Satan

Zechariah 3 begins with Joshua the high priest being accused by this shadowy figure who goes by the name of Satan. I began my talk by describing a voice that goes on in my own head. It reminds me of my sin, tells me that I am worthless and hopeless and points out that there is no way in which God could love me and use me. Having told people this at the Alpine Bible School I then asked the question- “Am I the only one who faces that?” It was intended to be a rhetorical question so I was a bit surprised when a chorus of “No!” came back at me. But it was quite a striking moment because it flagged up that facing this sort of satanic opposition is part of normal Christian experience and has a significant depressive impact on believers. Satan really does accuse Jesus’ brothers and sisters and we feel that deep in our hearts in a way that can damage us. We don’t speak of this often but it is a major reality for us.

Given that this is a major pastoral issue we need to learn how to confront it. Two main things are required. Firstly, we need to learn to spot the difference between the voice of the Spirit and the voice of Satan. When we hear the accusations of sin and guilt leading to a sense of condemnation it is very easy for us to accept this voice as our own or even the voice of God because, after all, we are guilty of sin and the Spirit rightly convicts us of this. But where that spirals into despair and condemnation then that is evidence that it is Satan’s voice that we have absorbed for the Spirit’s work is to point us to Christ as the answer to sin. I think we would be significantly helped as Christians if we stopped more often to ask the question- whose voice am I listening to?

But secondly we need to learn to apply God’s remedy to the accusations of Satan. In Zechariah 3 we learn that God will remove sin a single day through the work of this mysterious figure called the Branch. The result will be that those in filthy clothes are made completely clean. Isaiah 22 has the Branch as a descendant of Jesse, the father of David. Zechariah 3, therefore, is one of the most glorious and least well known pictures of the Lord Jesus, the Son of David, who deals with sin in a single day so that His people might be clean and have a way of facing up to the accusations of Satan. I love Martin Luther on this- “When the devil throws up our sins up to us and declares that we deserve death and hell we ought to speak thus: ‘I admit that I deserve death and hell. What of it? Does this mean that I shall be sentenced to eternal damnation? By no means. For I know One who suffered and made satisfaction on my behalf. His name is Jesus Christ, the Son of God. Where He is, there I shall be also.”

I loved preaching Zechariah 3 because it is best chapter I know for dealing with a significant pastoral challenge for Christians- learning to recognise and confront the accusations of Satan in our hearts.

The other reason I love preaching Zechariah is that you have some of the clearest material about Jesus in the whole of the Old Testament. Most people are initially unaware of it but are excited when they see it.

In chapters 9-13 you have a perfect picture of the run up to the cross. In chapter 9 a lowly King rides into Jerusalem on a donkey to be received by shouts of acclamation. In chapter 10 you see that God comes to shepherd his people because the people at the time were like sheep without a shepherd. However in chapter 11 this Good Shepherd who was bestowing grace and uniting His people is rejected and valued at thirty pieces of silver. The flip side of this is that subsequently in chapter 13 you see that it is God Himself who ordains that His shepherd will be struck- speaking both of the human agency and divine plan evident in the cross of Christ. Perhaps most astonishingly of all, in chapter 12 you see God Himself being pierced and the people mourning over His death with the result that a fountain is opened to cleanse the people from sin. All of these prophecies are cited in the various Gospels but it is something of a treat to read through Zechariah and see them all together and to note how central these events are in the infolding history of the people of God.

It was something of a co-incidence that whilst I was preparing Zechariah I was asked to do some work on leading second century Christians including Justin Martyr. He was not a natural Christian- he was a converted philosopher. What led to his conversion in part was the way in which the Old Testament prophecies pointed so perfectly to Jesus. There is a God who has ordered history in such a way that it centres on Jesus. Zechariah was often quoted by Justin. In perhaps his most well known work Justin writes to the Roman Emperor, arguing for the truth of the Christian claim that the One worthy of worship is astonishingly one who dies on a cross. The Old Testament prophecies are the key evidence for this. Why would a man worship somebody who was crucified “unless he had found testimonies concerning Him published before He came?”

Justin went on to argue that it was necessary to believe in Jesus because of the prophetic warnings about the end of the world, including those in Zechariah 14. He writes this, “Since we prove that all things that have already happened had been predicted by the prophets before they come to pass, we must necessarily believe that these things which are in like manner predicted but are yet to come to pass shall certainly happen.”

I loved teaching Zechariah 9-14 because it points to Jesus so clearly and because it is so little known. And it doesn’t simply point to Jesus as a historical figure. Remarkably it says that the abominable piercing of God by humanity is nevertheless the means by which a fountain of cleansing is opened on the single day when God removes sin. That in turn becomes the basis on which Christians face up to one of their great challenges- the inner voice of Satan. Zechariah is a wonderful book that points to a glorious salvation.