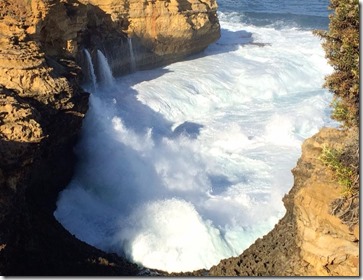 I am deeply thankful for the last six weeks of sabbatical and holiday. I’ve seen some remarkable places (the excuse for the random picture above) and enjoyed fellowship with a variety of churches. As it draws to a close I am trying to draw some threads together on what the Lord has taught me.

Book of the year for me this year has been Sinclair Ferguson’s The Whole Christ. It starts with a discussion of The Marrow Controversy– a somewhat obscure theological dispute of the 18th century that need not detain us here. But the pastoral strength of the book is its insistence that God’s grace is the answer to the two problems of the Christian heart- legalism (the notion that God’s love and acceptance is dependent on my performance in keeping His law) and antinomianism (the idea that God’s commands can be freely ignored.) Ferguson’s key idea is this- that antinomianism and legalism are not so much antithetical to each other as that both are opposed to grace. The legalist does not need to become antinomian and stop bothering about obedience- he needs to understand grace. Perhaps more interestingly, Ferguson argues that the antinomian shouldn’t be encouraged to take up a bit of legalism. No-God’s grace in our union with Christ is the need for them as well.

Why is this the case? The need for the legalistic heart (one of the most common spiritual sicknesses according to Ferguson) to appreciate grace is obvious. Because grace is so counter-intuitive (where else do you get better than you deserve?) we need constant reminding of God’s love in Christ- a love that is never merited, earned or deserved. Only that way can a lack of joy or harsh condemnation of others that reflect a legal spirit be avoided. Interestingly, Ferguson has a call for pastors in this area- they need to be “mastered by the unconditional grace of God” so that their preaching will have the tone of the warmth of God’s love so they might not inculcate the sickness of legalism in the heart of their congregation.

But why does the antinomian need to know the goodness of God’s grace? It is because the assumption of the one avoiding God’s commands is that He is not good and that His laws are there to oppress us. Ferguson takes his readers back to the first lie in the garden where Satan misrepresents God’s character as forbidding Adam and Eve to eat from any tree. You see the lie- God is not generous and kind. Every time we sin it is because we believe that God’s commands are not good for us. That’s why simply telling people to obey doesn’t work in the end. People need to believe that the commands of God are an expression of the love and grace that He has towards us. We need to know that the grace of God in Christ frees us to live the life that is best for us. Each time we face temptation we are in the middle of a battle of belief- will I believe that God is gracious and good and so His commands are gracious and good?

The same principles- expressed somewhat differently- are at work in Edward Welch’s book Addictions- a Banquet in the Grave. The first half of the book is hard work but necessary as Welch lays out the reality that sin lies behind addictions. We have to acknowledge our culpability. But what is the antidote? The danger for the Christian wrestling with an addiction is the belief that God will be pleased with them once they have managed to defeat it. That is legalistic justification by works- and is also likely to be impossible. Welch points out that guilt and change scarcely ever co-exist. The misery that guilt engenders tends to lead to seeking refuge in the old addiction. No- it is the deep knowledge of the forgiveness of our sins that enables growth and change. From that position, though, the battle (and battle is the right word) again is to resist the lie that God is not good. We need to believe that the life God presents to us is better than that offered by an addiction. That will lead to obedience to God, for if God is good then the wise person will love to have God tell them what to do.

All of this has deep significance for various contemporary issues. Probably worthy of a blog all of its own is Glynn Harrison’s A Better Story (most of which I read in what felt like the middle of the night somewhere between Singapore and Brisbane!). Harrison surveys our culture’s attitudes to sexuality and notes that the revolution since the 1960s hasn’t delivered the good that has been claimed for it. People are lonelier, more paranoid about their appearance and, according to surveys, having less sex than used to be the case. Harrison encourages Christians to have confidence to live out a Biblical approach to sexual morality. That involves recognising sexuality as a good gift from God to be used in marriage and looking to where it points in the glorious and wonderful consummation of the relationship between Christ and the church. That really is a better story and, again, the call is to believe in the goodness and grace of God in giving us the gift, boundaries and signpost of sexual intimacy.

I was hurriedly reading Harrison’s book on the plane because part of my sabbatical involved speaking on the subject of same sex attraction to a group of churches in Brisbane. It was a great evening and I was very grateful for the opportunity. (And if, for any reason, you want the video of that evening then do drop me an email.) My essential argument was this- it is possible to be attracted to people of the same sex, live by biblical commands and to flourish. Why? Because God- and His commands- are good and gracious.

That is the battle for Christians. We’ll need to fight because the world around us, Satan and his forces and the sinful nature of our own hearts will all cause us to doubt the goodness and grace of God. But when I am tempted to sin I need to recall that God’s grace means that His ways are best. And when I fall, I don’t try to earn God’s approval back. Rather, I rest in the sheer lavish and unmerited grace of God.