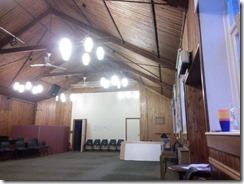 A friend once described me as a sentimental old fool. I plead guilty. One of the signs of that is that I tend to notice anniversaries. For me, this September has marked fifteen years as a pastor at Woodstock Road Baptist Church. I am aware that is not a major anniversary but it has been the cause of some reflection and nostalgia for me. From my perspective it has been a remarkably happy partnership. The church continues to be a delightful place to serve. As I look back I can certainly recall pastoral situations I might have handled differently, sermons I would like another crack at and much that I have omitted to do. And yet I have also been able to reminisce about what God has done here. People have become Christians, we have seen others arrive as young Christians and grow and flourish whilst others have endured despite real hardship. We have much for which to praise God.

Whilst I was out walking recently I tried to reflect on the main lessons I have learnt across fifteen years. They are a bit haphazard and if I had gone for a walk on another occasion different things may have come to mind. But, for better or worse, here are four reflections.

Lives and eternities really have been changed here. And it has all been down to God’s Spirit working through His Word. We really don’t do anything flash. We simply proclaim Jesus from the Bible, applied to 21st century life. We respond to God’s Word as we sing and pray. As we do that, people have been changed- sometimes dramatically but more often gradually but definitely through the constant dripping of God’s Word. I suppose as an evangelical I am supposed to believe that happens. Fifteen years in I can see individuals where it has definitely happened.

Our approach (which long pre-dates me) has been to work consecutively through books of the Bible- normally across eight to ten week series. I am convinced that it still the best approach, allowing the Bible to set the agenda. It forces the preacher to issue challenges to the congregation when the text demands it. However, I am convinced that some of our most significant times have not come from the challenging passages but on those occasions when I have had the massive privilege of simply proclaiming the glory of Jesus and the wonder of belonging to Him. At those times it has felt like we have known a real joy in being Christians as God’s Word has spoken to us. And I am absolutely convinced that nothing produces sacrificial, growing Christians quite like a deep joy in knowing Him. I think God has done that amongst us at times- and I am thrilled by it.

One of the great benefits that I received was becoming a pastor after the key battles had already been fought. The church had worked out its doctrinal position and was standing on the authority of the Scriptures. I have always known that I would get more criticism if I ducked preaching the message of a particular passage than if I preached it straight. That’s a huge bonus for a pastor. Of course, at one level, such battles are never fully won. The truths on which we stand do need clearly re-stating so that they are not lost. However, I have appreciated that we have not to spend a long time as a church working out where we stand on major doctrinal areas.

But it is important what happens from a place of standing for the truth. I recently heard Paul Mallard speak. He noted the dangers of churches that believed the Gospel but essentially played it safe- there were no initiatives, no risks, perhaps no need to depend on the Lord. I am hugely grateful that has not been the case here. Sometimes it feels like our core convictions haven’t changed but everything else has! Again, that risk taking pre-dates me- I started as pastor on the same Sunday that Marston Neighbourhood Church was planted. Since then, there has been the introduction of the trainee scheme (grateful for our fab five across the years!), an expansion in the number of mission partners supported, partnering the Shout community project on Waterways, a massive building project (which was needed- see the photo above for a sense of what it was like before), moves to make us more contemporary as a church, the sending of a homegroup to support the launch of Wheatley Community Church and, most recently, the establishment of Grace Church Kidlington. All of them felt challenging. One of them (have a guess!) I was initially and wrongly sceptical about. But all of them have caused us to need to depend on the Lord. We can be deeply grateful for the answers to prayer that we have seen. And they remind us to keep risking discomfort as we seek to get the Gospel to people who need to hear about Christ.

3. Praise God for the body

One of the things that has remained consistent (again from before my time) is that, under God, the church has been led by a team of elders rather than an individual pastor. That is biblical- perhaps a theme for another blog at some point. It has been a particular pleasure for me to work alongside Keith, David and Phil (for a week so far!) as fellow pastors. The make up of the eldership has changed totally across my fifteen years but God has been good to us in consistently providing a team that is faithful to the Scriptures and does genuinely seek to lead the church in a loving and humble manner, even if we don’t get it right all the time.

But it is not just elders. I look around to see people serving in a heap of ways- caring for the elderly, sorting out technology, teaching children, being exceptional administrators, reaching out to the community, leading homegroups and so on. There are vast areas of church life where I know very little of what goes on (what does happen in tech corner?!). But that is as it should be. Again and again the Lord has provided willing servants with a variety of gifts and we can be so thankful for that.

4. It is always strength in weakness

I suppose fifteen years in I should now feel on top of the job. But I really don’t. There are still times when I don’t feel like I have the emotional resources, situations where I don’t know what to do and sermons that I don’t quite know how to write. Yet I shouldn’t be surprised. God puts his treasure in jars of clay to show that the power is from Him and not from us. And I feel as much a jar of clay as I did when I started. At a personal level I am hugely encouraged that the church knows and understands that. One of the most moving moments for me across the last fifteen years was the supportive response of the church to this blog.

But it is not just me who is weak. We as a church are weak. Not many of us would rank as hugely impressive individuals by many standards. We may not all necessarily be blessed with great charm, charisma or emotional strength. And yet the Lord has done eternal good through us. Why? Because His power is made perfect in our weakness.

Much else could be said. Our youth work has been a real highlight of latter years alongside out new outreach to older people. Students have come and gone with many speaking of how the Lord has changed them during their time here. We have sent teams to Kenya and supported mission work such that one people group now has a New Testament in their language.

And we have fallen short at times. We look back with thanksgiving and we remain hungry for more. One of the prayers I have come back to over the years and have preached on a few occasions is Paul’s prayer for the Ephesians: “I keep asking that the God of our Lord Jesus Christ, the glorious Father, may give you the Spirit of wisdom and revelation, so that you may know him better.” (Eph 1:17). Like the Ephesians, we do know God. We have known God at work amongst us. But that drives us to want to know Him more. To know Him at work more powerfully amongst us. And for those who don’t know Him to come to know Him. That’s why we keep praying.

The Lord has been so good to me in the last fifteen years. My heart’s desire is that I- and we- would know that more and more in the years ahead.