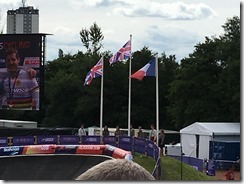 A couple of weeks ago I had a conversation with a friend on Brexit. We were on opposite sides of the debate and I was aware, from my end, that my emotions were running higher than I would have wanted. That was understandable and I suspect I am not alone in that at the moment. But I did reflect that Christians in particular need to use their minds to assess issues from a biblical perspective. Here is a particularly fine example of doing that well from somebody who (I suspect!) voted the opposite way to me in the referendum. You can find my attempt at writing something similar here. On this occasion I want to reflect on the Christian approach to issues around nationality and patriotism which lie behind the Brexit debate. How should I think about being British? Or Scottish or Welsh if that is how you want to define yourself? These things run quite deeply within us- but it is good for us to think about them rather than simply leave our attitudes unquestioned.

There are all kinds of reasons why I love being British- and, apart from during the Six Nations, I instinctively feel British rather than English! The history of the country with its ancient buildings and monuments continues to fascinate this historical geek and gives me opportunities to mock Americans and Australians when they refer to their institutions as old. Rugged coastlines with the wind sweeping in are by far the most beautiful places in the world. For two weeks every four years I do little more than cheer rowers, cyclists and athletes to gold for team GB. My taste for popular level classical music means that I can even enjoy the flag waving nonsense that is the Last Night of the Proms.

And yet at a more serious level there are reasons for Christians to be cautious about our national identity for we have a higher loyalty. Paul’s description of believers at the beginning of his letters has a standard form- “To all God’s holy people in Christ Jesus at Philippi…” would be an example. The believers are in a particular location where God has placed them (Acts 17:26). But they have a higher allegiance and identity beyond geography. They are united with Christ. Of course this is the most long lasting of identities. You see a similar approach in the pictures of heaven in Revelation. They preserve national identity- it is possible still to tell that the great multitude in Revelation 7 come from different nations, tribes, peoples and languages- but stress the unity of those identities in the higher calling of praising of the triune God who sits on the throne. Our national identity matters but it is some way off being the most important thing about us.

Last November I was watching the Festival of Remembrance from the Royal Albert Hall. The hymn I vow to thee my country was being sung and, to be honest, my eyes rolled at the overly earnest patriotism of the opening verse. What I learnt was that the second verse is brilliant in the way it points to a better country:

“And there’s another country, I’ve heard of long ago,
More dear to them that love her, most great to them that know;
We may not count her armies, we may not see her King;
Her fortress is a faithful heart, her pride is suffering;
And soul by soul and silently her shining bounds increase,
And her ways are ways of gentleness and all her paths are peace.”

Whatever our national identity, our supreme allegiance is to Christ, his family across all nations and the prospect of an international new creation.

But how should that work out in terms of our lives and how we engage in the current debate?

Now pride isn’t limited to one nation. The European project reeks of pride and hubris- and it seems to me that the Bible is suspicious of supra-national movements set up by humans. However, as I write we are potentially ten days from a no deal Brexit. One of the lines I have heard repeated is “We don’t need to worry because Britain is a great country.” To be fair we don’t fully know the implications of leaving the EU without a deal but to boast about Britain being a great country is inappropriate for a Christian. Any greatness is ultimately totally dependent on God. Much of the claims to Britain’s apparent magnificence arises from what happened during the Second World War. However, it is worth reflecting that at that time there was quite an awareness of the need of God’s help with national days of prayer and so on which is hugely lacking now. The Christian knows that God is the One who humbles and exalts nations (Luke 1:52). Quite soon after the referendum I speculated that this might be a way in which God humbles us as a nation- reflecting the fact that in our pride we had ignored Him. Let’s be honest- the whole thing is a mess right now. Scarcely can the country have been more divided or politicians looked so impotent. There doesn’t appear to be an easy way out. Leavers need to realise that if we do leave without a deal then the next few years could be economically sticky with a significant impact on the poorest. Remainers need to realise that if we somehow don’t leave the EU this will confirm a significant section of the population in the view that their opinions don’t matter and that is quite dangerous. We are in desperate difficulty and it may get worse but anybody who believers in the sovereignty of God must see His hand behind it, potentially to dent our pride. The answer for the Christian cannot be boasting about the greatness of our country but humility before the Lord.

Have a heart for the country

“I speak the truth in Christ- I am not lying, my conscience confirms it through the Holy Spirit- I have great sorrow and unceasing anguish in my heart. For I could wish that I myself were cursed and cut off from Christ for the sake of my people, those of my own race.” (Romans 9:1-3). Now- Paul’s experience of an anguish in his heart for the country isn’t exactly the same as our situation. His people were the Jews who had a special history with God and, whatever Boris Johnson might think, Britain leaving the EU is not a parallel to Israel being rescued by God from Egyptian slavery. And yet- isn’t agony about the state of our country appropriate? Our Creator to whom we owe everything is ignored. People are facing death and judgement without hope. God is not revered as He should be. Can I be honest? To any Christian thinking clearly- the big issue that should stir our emotions is not Brexit (for or against) but the fact that around 3% of the country know Christ and that figure isn’t rising. The thing we need most of all from God is mercy.

Our country is in a mess- and it might get worse. This feels like a good time for us to remember our supreme identity and to humble ourselves before God and ask for His mercy to be upon us.