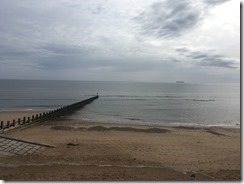 One of the highlights of my sabbatical has been a morning spent on Aberdeen beach (beautiful but a touch chilly) reading the end of the Screwtape Letters. Here is the second half of summary of main themes from the book with an advance warning of spoilers!

Once the “patient”, as Screwtape terms him, has become a Christian, Wormwood’s main role is to lead him away from devotion to Christ. Screwtape notes that this has become easier because Christians have stopped talking about the dangers of being led astray by the world. (I’m not sure we could say that we have started discussing it in the seventy years since Lewis wrote that.) The aim is to get the Christian to make little choices that will lead him away from wholeheartedness so that he can quietly drift without noticing that it is happening. Above all else- encouraging moderation in all things will ensure that the Christian doesn’t do too much damage to Satan’s cause. As I read this I did have a sense that this gets very close to the bone. I wonder whether we do need a greater appeal to sacrifice and a fear of worldliness.

It is probably worth mentioning one additional way in which Screwtape encourages Wormwood to lead the Christian astray. He suggests trying to get him to marry somebody who won’t help his Christian life. He is right- very little is more important than marrying wisely (if you are going to marry!)

The Law of Undulation

What about times of spiritual dryness? At one level Wormwood suggests these can be useful for Satan’s cause- sexual temptation can be applied particularly in these periods. But the really insightful point that Lewis makes is that the main danger of periods of dryness is that they yield despair rather than being regarded as a natural phenomenon. We are physical beings who get tired and sick. This will impact our spiritual fervency- it naturally goes through peaks and troughs.

But what do we do in those troughs? We trust that the Lord is at work. Wormwood describes the Lord’s way of working in some wonderful words- “He relies on the troughs more than on the peaks; some of His special favourites have gone through longer and deeper ones than anyone else.” The Lord is at work in the dark times and our clinging to the Lord when everything else is taken away glorifies Him. I recall quoting the following when I preached on Job. “Our cause is never more in danger than when a human, no longer desiring but still intending to do our Enemy’s Will looks round upon a universe from which every trace of Him seems to have vanished, asks why he has been forsaken and still obeys.” The reason I quoted it was because this is the issue in Job. Satan’s wager is that when everything is taken away Job will curse God because he is only interested in the good things God gives rather than God Himself. It is why the key thing in the book is that Job ends up blessing God before all his goods are returned. Satan is proved wrong- along the lines Lewis suggests. Of course the supreme example of this is Jesus Himself on the cross. So here is the encouragement for followers of Christ- our perseverance is a key marker in the spiritual battle.

The Mercy of God

One of the most interesting points is made by way of contrast. Throughout the book Screwtape makes clear that any failure on the part of Wormwood to lead his Christian astray won’t be tolerated. There is no mercy in hell. The last chapter is darkly comic. Wormwood does indeed fail- and Screwtape signs himself off as a “ravenous uncle.” Wormwood’s future as a meal is left to the imagination.

By contrast God is the one who delights to make servants sons. He wants to make us one with Him yet retaining our identity. And there is a lovely phrase where Screwtape describes God’s attitude towards us- “He really likes the little vermin and sets an absurd value on the distinctives of every one of them.”

Spoiler alert- the last chapter comes as a shock. Throughout the book the backdrop of the letters is war. And death is mentioned early on- Wormwood is described as foolish for hoping that his subject (a new Christian) will die- for Screwtape points out that he will then be beyond reach. Even still the death itself comes as a shock. But, when it happens, it is tremendously poignant writing.

“One moment it seemed to be all our world; the scream of bombs, the fall of houses, the stink and taste of high explosive on the lips and in the lungs, the feet burning with weariness, the heart cold with horrors…next moment all this was gone, gone like a bad dream, never again to be of any account.”

And when it happens “all his doubts became, in the twinkling of an eye, ridiculous.” When he meets God he suddenly makes sense of life- even those times when he felt all alone. “ So it was you all the time,” he says. It is the day when he saw Him.

Reading that on Aberdeen beach is a treasured memory.

There is more to say. I could talk about temptation and Screwtape ridiculing the human notion that the best way to get rid of temptation is to yield to it. Or I could talk of Lewis describing God as hedonist offering pleasures at His right hand for ever more. But I should stop so perhaps I can motivate you to explore these themes by reading it for yourself?