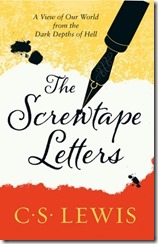 I had long been aware of it but had never actually read C.S.Lewis Screwtape Letters until my current sabbatical. You may be familiar with the overall thrust- they are imaginary letters from a senior demon (Screwtape) to his young nephew (Wormwood) offering advice on how to lead somebody away from the Lord (The Enemy). The story starts with Wormwood working on the man before he is a Christian and then he continues to tempt the man once he has become a Christian until his death. It is not a theological work on evil- so much as a set of insights as to how people can be made to wander from God. It is not working from Scripture in a particularly tight way so there will be stuff in there with which you will disagree but my overall sense was of real wisdom- and a work that sounds astonishingly contemporary despite the fact that it is now over seventy years old.

There are eight things that I took away from it- which I’ll put in two separate posts:

One of the most striking comments Screwtape makes is that he does his best work not by putting things in people’s minds but by keeping them out. Lewis notes that humans can live with dozens of incompatible philosophies in their head without really thinking through the purpose of the universe. They don’t really study science but have a vague notion that contemporary ideas somehow rule out God. People are encouraged to ignore previous generations and simply to rely on the wisdom of the present age. There is a huge tragedy in this. Nobody is forced to realise their true situation. Screwtape uses those who lie- promising life to the dying so that they never face up to the perilous state they are in. “The safest road to hell is the gradual one- the gentle slope, soft underfoot, without sudden turnings, without milestones, without signposts.”

Drifting through life without reference to God is the problem- rather than some obvious planned rebellion. Lewis speaks of the power of Nothing- the ability to “steal a man’s best years not in sweet sins but in a dreary flickering of the mind over it knows not what and knows not why.” He pictures a man arriving in hell saying- “I now see that I spent most of my life in doing neither what I ought nor what I liked.”

That packs quite a punch. One wonders what Lewis would have made of a generation scrolling absent mindedly for hours through social media or Netflix. There is a challenge for Christians here (at least for me)- are we just wondering through life without really thinking about it? But there is a broader challenge as we think about friends who aren’t Christians. Most people haven’t consciously rejected Christianity. The reality is that they haven’t really thought about it. That may provide us with an opportunity to initiate conversation.

“You will have noticed,” Screwtape writes, “that nothing throws a man into a passion so easily as to find a tract of time which he reckoned at his own disposal unexpectedly taken from him.” That got my attention- it is clear that Lewis knows me for I am hopeless with unexpected interruptions when I have something planned. His explanation is striking- we regard time as our own. This is- of course- a complete joke for we cannot make or keep time. It all comes as a gift from God.

Screwtape then opens up this theme of ownership more broadly. “The sense of ownership in general is always to be encouraged.” Truth be told- whenever we claim that anything is our own we are living out of step with reality. Everything belongs to God for He made it- though Screwtape makes the point that Our Father (his name for Satan) is seeking to claim it all by conquest.

There is such insight into human nature here. Most of my problems start when thinking of something that belongs to the Lord as mine. Lewis’ work is a helpful way of calling us to think clearly.

Dotted throughout the book are smaller gems. They are not the big themes but throwaway comments that make you smile with recognition. At one point the object of Wormwood’s temptations is in dispute with his mother. Screwtape has advice on how to make the situation more tricky- encourage him to take all his own words at face value whilst judging all his mother’s comments with the most over-sensitive interpretation of tone and intention. Or in a church context the best way to create dispute is to forget his own sin and focus on the vices and hypocrisy of the rest of the congregation. Jesus would use a point about a speck and a log to make the same point- it is an image that we need to hear repeatedly.

The need for courage

Here is a telling comment: “Courage is not simply one of the virtues, but the form of every virtue at its testing point.” In other words- you can have a commitment to truth, love and so on but if you are unable to battle courageously at the difficult moment then those commitments will prove worthless.

There is an awful lot of truth in that and, I suspect, we underplay it. After all there must be a reason why there are so many injunctions in Scripture not to be afraid. The call to courageously persevere and avoid cowardice is a major theme in Revelation- the chief application of the glorious visions.

All of the above got under my skin- forcing me to acknowledge that this is often the way we behave. Spotting our areas of weakness that Satan can exploit is the first half of the battle. Perhaps the above will help- I’ll try to write up the remaining reflections in the next few days.