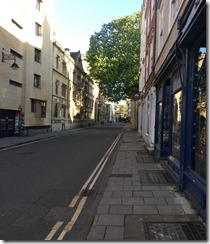 “How deserted lies the city, once so full of people!” Such was my thought whilst recently taking my exercise in Oxford city centre looking at the historic sites, normally packed with tourists and students now lying empty. And such is the first verse of the Old Testament book of Lamentations. This reflection prompted me to head back to this neglected book over the last few days- and reflect on its lessons for a pandemic world.

One of the reasons I appreciate the Bible is the seriousness with which it takes suffering and pain. And Lamentations is a stellar example of that. It is, in Barry Webb’s phrase, an “A-Z of grief”. Four of the five chapters are acrostics- with each verse (or series of three verses in the case of chapter three) starting with the next letter of the Hebrew alphabet. Grief so often swirls around the mind. Yet here our author (quite possibly Jeremiah) seeks to order his thoughts and describe exactly the tragedy that has befallen Israel. Almost certainly a result of the Babylonian invasion in 587BC, it is a decidedly grim spectacle. It is an image of departed splendour- a nation once marked by treasures is deserted and mocked. The golden children of Zion have become mere clay pots. The people groan as they search for food. Our author’s eyes fail from weeping as he sees children faint in the streets. There are terrors on every side. Perhaps the most brutal assessment comes in 4:9- “Those killed by the sword are better off than those who die of famine.”

For some of us I am aware that the pandemic has not hit us too badly. It has been a nice break not to have to travel to work, Zoom has mitigated some of the worst of the isolation and we can cheer ourselves with positive stories like the heroics of Captain Tom. And yet there are times when we need to face the horror of the situation. Over 20,000 people have died prematurely in this country alone. That’s before you count the deaths from other causes because of unavailable treatment. But I think the reality weighing even more heavily at the moment is the sense that we are still probably closer to the start of this crisis than we are to the end of it. What will be the impact on emotional health as this turns into months of standing at a distance to other human beings and not being able to go out at all in the case of those who are most vulnerable? What will be the impact of higher levels of unemployment and the country having even fewer resources than it did when it entered the painful period of austerity? What happens to the church when the novelty of sofa services wears out after several months of them and we still can’t meet together? What is the long term impact on young people of a lost education? And you could ask many other questions besides. Understandably we want to close our minds to them. But they are there and Lamentations encourages us to put them down in an ordered way that we might weep over them.

And not just weep over them. We also need to apply some theology to them. Lamentations is certainly not afraid to do that. Our author has a robust theological understanding of the situation facing Jerusalem. There is no way round the fact- the Lord has caused the problems. That’s particularly evident in chapter two- the first eight verses each contain a list of what the Lord has done. He has covered Zion with His anger, He has swallowed up Israel, He has laid waste His dwelling and so on. And the reason for this is apparent- “The LORD has brought her grief because of her many sins.” (1:5). For years the Lord warned the people and called them to repent- but eventually His judgement fell on Jerusalem. “The LORD has done what he planned, he has fulfilled his word, which he decreed long ago.” (2:17). God humbles those who are proud- “He has brought her kingdom and its princes down to the ground in dishonour.” (2:2)

Now, at one level, our present situation is different. We are not God’s people as individual nations and we weren’t given specific warning of the judgement of God as Israel was in Jeremiah’s day. And yet it is actually the similarities that strike me most. In the Bible God is persistently One who humbles the proud. Mary sang of that before the birth of Jesus. And there is no way of avoiding the fact that our societies have been growing in exhibiting a proud rejection of their Creator. I simply don’t think you can avoid speaking of the sovereignty of God at the moment and His work of humbling people who have sinned against Him. As I have argued previously this is a call to repentance.

The reason we need to talk about it is that this alone provides the route to a solution. In Lamentations 1 you have the repeated refrain- “there is no one to comfort her”; “no one to help her.” Israel had run after a variety of other gods in her time and sought alliances with other nations. But at the crucial moment none of them were any use. Perhaps the striking reality of the present day is the lack of any clarity on a way out- leave us in lockdown and the economy dies, but bring us out of lockdown and the infection rises again. There is no easy way around that and no obvious solution in the short-term.

For Israel, the only source of help was to go to the cause of the problem. Listen to the force of 2:18-19: “The hearts of the people cry out to the Lord. You walls of Daughter Zion, let your tears flow like a river day and night; give yourself no relief, your eyes no rest. Arise, cry out in the night, as the watches of the night begin; pour out your heart like water in the presence of the Lord. Lift your hands to him for the lives of your children, who faint from hunger at every street corner.” That prayer comes with a strong note of repentance- “Let us examine our ways and test them, and let us return to the LORD. Let us lift up our hearts and our hands to God in heaven and say: ‘We have sinned and rebelled…’” (3:40-42). If the events have happened because of the Lord, the only solution is to go back to that Lord in prayer.

There are other applications such as hope that I will return to in a second post. But, for the moment, the call of Lamentations is to enunciate our suffering and then turn to the Lord in serious prayer. That challenges me. As a church leader my focus over the last few weeks has been trying to keep the church going, keep in touch with different people and provide encouragement to those who are suffering. I’m not sure I have been good at calling us to pray. But that is the burden of Lamentations- to pour out our hearts to him like water. This week we started daily prayer meetings as a church on Zoom and we have been encouraging each other as we have worked through Psalm 103. But my plan next week is to read a portion of Lamentations together each day. Because these are times to weep, to think clearly about what is going on and to plead to the Lord, who alone is the source of help.