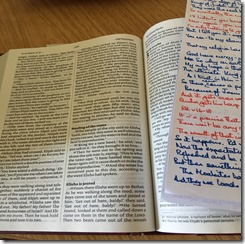 One of the privileges that I have had for a number of years now is spending an hour each week helping out at the South Central Ministry Training Course. Alongside doing occasional expositions on 2 Corinthians (what else would you teach to those who are often in the early years of ministry?!) and leading a brief course on pastoral theology my main role is to chair a small group. The participants (mainly young but with some middle aged and early retired folk thrown in) take it in turns to deliver brief talks from a passage of the Bible. My job is to help guide the feedback. Amusingly this means I change personality each year. Occasionally I have led groups where people gave quite critical feedback to each other, meaning I had to be the nice reassuring one. More frequently the group is very encouraging to each other meaning that I have to do the “Err…what about doing this differently in the future?” role if people are to improve. Overall it has been a real joy to see people wanting to serve the others and the vast majority of the talks are significantly better than anything I was producing at their stage. A number of those who have been in my groups in years past are now serving as pastors in different parts of the country.

Essentially we try to cover three areas in feedback:

Was it faithful to the text? Was it well applied to the “imaginary” group that was being addressed? Was it presented clearly and interestingly?

It is a fun process- occasionally I imagine what feedback I would get on one of my sermons here at Woody Road!

But as we have discussed those issues above, I am aware that I have developed various hobby horses that come up each year. I hope they are helpful and I thought I would write some of them up in an attempt to benefit those who are starting to give talks from the Bible in a variety of settings. Here are three of them. They are far from the main things you would want to say about Bible handling- but given they came up regularly they may be useful.

Clear on the Text- What is the distinctive of this passage?

Last term we spent time as a small group in the latter chapters of Matthew’s Gospel- principally looking at the death of Jesus. One of the things that we noted as a group was our tendency to revert back to talking about the cross as the place where Jesus died for our sins or showed his love for us, even where those things were not the particular emphases of the passage. Now at one level that isn’t a disaster- praise God that both of those things are gloriously true! But the problem is that familiarity breeds contempt and if we hear that all the time then the cross will fail to warm the listeners’ hearts. The reality is that the cross represents so many different things as you work through these chapters- it is the place where Jesus bore God’s anger (the sword and cup- Matt 26), the place where He stood when humans fall (Gethsemane and the denial by Peter), the place where He reveals Himself to be a King prepared to suffer (the trial with Pilate), the place where He is God forsaken that we might have access to God (the cry and the curtain torn), and the place where the power of death is defeated (the emergence from the tombs). By the end of a series on these chapters the listener should be aware of the multi-faceted glory of the cross. And some of those less explored themes are powerful- the radical nature of Jesus’ kingship is hugely attractive in a culture where people tend to seek power for its prestige.

The temptation to resist is to see something like the cross (or a familiar command like the call to love one another) and simply go back to my pooled resources on that theme. To make a text live we need to keep asking the question- what’s this text saying that is new and different?

Applying the Text- What truth can be applied to the heart?

I wrote a longer couple of pieces on this subject a few years back. I remember struggling with application when I started preaching about twenty years or so ago. I was fine when there was an imperative in the passage. That’s easy- you just tell people to do what it says! But what happens when (as, for instance, in a Gospel narrative) there really isn’t one? The temptation is to tag one on. I’ve mentioned before that my favourite tag on always used to be “Do evangelism!” So I would preach on something like Jesus’ authority to forgive sins and then rant for ten minutes about the fact that we must tell people this important news, leaving people emerging from a talk on forgiveness feeling guilty about their lack of evangelistic activity. That is worth avoiding. But you do want to do some application rather than simply state a bare truth. The work we need to do is to apply that truth deeply to people’s hearts.

Take a couple of examples from above. The cross is the place where Jesus stands as we fall. I would begin to press into where people’s confidence lies. “Are you pretty self-confident? Self-assured? You do know you are going to fall one day. If you are honest with yourself for a moment, you probably know you already have. That’s why your confidence needs to be in another. Or maybe you are the opposite? You are broken by the times you have failed Jesus. Do you want to know the good news? He has stood in the test. You don’t have to trust yourself: you can lean on Him.”

Or take the issue of access to God. “Can I ask how it is between you and God at the moment? My guess is that for some of us- distance is the word. There will be all kinds of reasons. Perhaps we are aware of our sin. Perhaps we have suffered and clouds mar the path to God. Maybe we are just tired. But- friends- the curtain has gone. See- the Most Holy Place lies open. Isn’t that good?” Basically the aim is to take the specific truth and then think about how it might land in different people’s hearts.

Communicating the Text- What is the most interesting way of saying it?

Truth be told, my main hobby horse in this area is- use shorter sentences. Probably the most regular feedback I give on talks is to urge people to write as they speak not as they write. In written communication we tend to use longer sentences than when we talk. The problem is that because people write sermons they tend to use the wrong form of communication. So if you are writing a talk- break you sentences up. And don’t ever think of using a subordinate clause!!

The point is that we want to make talks/sermons easy for the listener in terms of maintaining concentration. It is a way of serving them. Others can do this well through appropriate illustrations. I am aware that this is not one of my strengths. But, despite that, it is still possible to think about whether I am communicating something in the most interesting way. Take the curtain in the temple being torn in two from top to bottom. You could teach that in two different ways:

Alternatively: “Imagine being in Jerusalem on Good Friday. You see the curtain in front of the Most Holy Place. You are painfully reminded of the distance between you and God. But then you hear a cry from the lips of Jesus as He dies, there is an earthquake and suddenly the Holy Place is open. There it is in front of your eyes. You know you are a sinner. But suddenly you can enter the very presence of God. And- wonderfully- that is our situation right now.”

So there are three hobby horses. Can I add a final caveat? None of them replace the need to pray and love those to whom we are speaking. I can forgive a preacher pretty much anything if I get the sense that he loves me and wants what is best for me. That will make me listen, even if he adopts none of these hobby horses. And- in the end- none of these hobby horses guarantees changed lives. Very little gives you a greater sense of weakness and inability than preaching. It is not that these days I doubt my ability to stand in front of people and deliver semi-coherent sentences (although even that ability is given by God and can be taken away). What I do know is that I have a complete inability to change hearts. It is why my hobby horse prayer on a Sunday morning has become- “Father please do what I can’t do.” So I hope the hobby horses are helpful but don’t trust them. We need the Spirit to work.