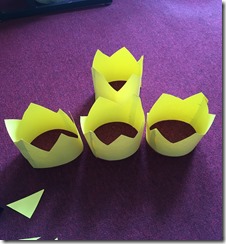 Let me tell you a secret. Most preachers find certain types of biblical material easier to preach than others. I suspect most of us in this country find New Testament letters the simplest. Personally, I have never found Old Testament narrative easy and, perhaps curiously, have always found it difficult to open up miracles for a congregation. Obviously then the summer period as we have worked our way through the Elisha-doing-lots-of-miracles narratives in 2 Kings (in an all age service setting- props from 2 Kings 3 above!!) has been completely straightforward!

What is the difficulty in preaching miracles? Surely seeing people receive miraculous provision, be cleansed of leprosy or even raised from the dead is intended to be wonderfully encouraging? Well there is the application difficulty- this is a lovely story but what are we supposed to do with it? What’s the lesson we are to learn? And that is linked to the pastoral difficulty. As I preach I am conscious of people who would love a similar miracle. There is the person without a job hearing a story of God’s miraculous provision. Agonisingly, there is the couple that you know would love to have children hearing of the Lord’s dramatic intervention in a similar scenario. There is the recently bereaved person hearing of the Lord raising the dead. Of course you are not going to preach that the same would happen for them if only they had enough faith. But what are you going to say? Lastly there is the credibility challenge. I want our studies in God’s Word to be accessible for those looking into the Christian faith. But there’s a fair chance they wonder in, hear a miraculous story and are just thinking- “Really??”. How should we respond to that?

I don’t find any of these challenges easy. But over the years I’ve listened to better preachers than me and I think I am getting a better grasp on how to preach miracles in a helpful manner. I’m writing it up mainly so that as Woody Road regulars listen to me preach, they know what I am trying to do.

The Credibility Question- it is easy for the God who made the world.

You understand the dilemma. How does the person for whom life has just happened in a “obeying the laws of nature” way believe that 5000 people can be fed with a few loaves and fish?

I tend to make the point that miracles are totally out of the ordinary. That’s why they have been recorded and talked about centuries later. The fact that you haven’t experienced one is precisely the point. It is why this passage we are studying matters.

But there is a broader point. Last Sunday we considered Elisha’s comment on a miraculous appearance of water in 2 Kings 3: “This is an easy thing in the eyes of the LORD.” Of course, logically it is. If you have a God who created the world (and I reckon I can make a strong case for that) then it is no great thing to believe that He can intervene miraculously. And- if that God comes to earth- well it wouldn’t be a surprise to learn that He can temporarily alter the laws of nature that He made. There really isn’t a credibility problem in believing in the possibility of miracles.

The Application Question- learn about the King in His Kingdom

At one level, there is often a straightforward lesson from a miracle- God is doing it to show that the person involved is really important. Clearly the supreme example of that is Jesus. John helpfully explains the purpose of the miracles that he records in His Gospel. Speaking of them as signs- they point to the reality that Jesus is the Messiah, the Son of God and that by believing you may have life in his name. The miracles do point to the fact that Jesus is the Messiah. That is John’s point- and seems to be the way in which Mark’s Gospel works as well. More than just the Messiah, in controlling the waves Jesus really is doing stuff that is only within the capability of God Himself.

What of miracles outside the Gospels- in Acts, for instance? Many of them are done by the apostles- and that is intentional. This is God affirming their authority to convey the true message of His Son. The miracles reveal them to be His mouthpiece and the ones through whom Jesus is still at work.

But is there more? Is the lesson of every miracle simply- “This shows that Jesus is the Messiah”? No- the nature of the miracle really matters. The point isn’t simply that Jesus can suspend the laws of nature- He does it for a reason. Take the frequent healing of lepers as an example. The key thing about leprosy is that, according to the Old Testament law, it kept people from worshipping God in the temple. So the healing of leprosy shows that Jesus has the power to deal with the uncleanness that forms a barrier between them and God. Or consider that in Matthew 4 and 9 there is a repeated phrase. Jesus goes through the towns and villages- “proclaiming the good news of the Kingdom and healing every disease and illness.” The two parts of that are linked. The miraculous deeds of Jesus reveal His Kingdom. And between those two references in Matthew’s Gospel you have blind receiving their sight, people set free from demon possession and a dead girl raised. Here is the point: Jesus is the King who has come and will come again and His Father and He are building a Kingdom where there is no sickness, evil or death. The miracles reveal the King and the nature of His Kingdom. And that’s key when it comes to pastoral issues…

The Pastoral Question- “Your Kingdom Come…”

It remains an easy thing for the Lord to perform miracles. I have no doubt that He still does so occasionally. It is fine to pray that He would do so in times of difficulty. But I am not convinced that “Pray for a miracle” is the chief biblical advice to the person who is wrestling with the dilemmas above. Rather- the call is to trust the King of the coming Kingdom and pray “Your Kingdom Come”.

It is no co-incidence that this is part of the prayer that Jesus encourages His disciples to pray in Matthew 6. Jesus has shown the nature of the Kingdom in His teaching and miracles. Don’t you long for that? Then pray- “Your Kingdom Come.” Of course God’s Kingdom will come fully and completely with the return of the Lord Jesus.

And have faith. Faith clearly plays a part in many of the miracles that Jesus does throughout the Gospels. Indeed there are places where Jesus can’t do miracles because of the lack of faith. Again- that has been used as a reason to encourage people to believe that God will do a miracle now or rebuke people when it doesn’t happen. And yet if the miracle is a demonstration of the coming Kingdom then the need for faith becomes clear. Jesus is bringing in a glorious Kingdom where sickness, evil, chaos and death are abolished. Those who will benefit from that are those who trust Him.

Now- I know that preaching about the coming Kingdom may not be what the person in immediate need of the Lord’s miraculous intervention wants to hear. And yet I am convinced that this is the best news. Can you imagine it? An eternity without pain. An eternity without sadness. An eternity where doctors and undertakers will be redundant. An eternity with the King who can make that happen. That is what is offered through the miracles that we see recorded in Scripture.

That’s why the response is faith- we trust the King. And we offer those two parallel prayers to the Father and the Son- “Your Kingdom Come” and “Come Lord Jesus.”