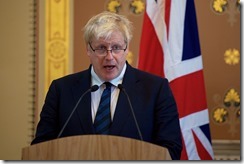 I have faced an interesting discipleship issue this week. For the first time in my life I am living in a country where I dislike our Prime Minister. It is not simply that I disagree politically so much as that I think character matters. There is no fundamental break between our public and private personas. So where you have a leader whose personal life is a history of broken promises and abandoned (or aborted) children- seemingly done without any shame or repentance that would mitigate the offence- then I think it entirely reasonable to regard political statements and promises with a degree of scepticism at best. But- the reality is that he is our Prime Minister and so I need to process that. I realise that I need to think clearly and biblically rather than simply react with frustration and anger. Perhaps in that battle I’m not alone- I’m certainly aware that it is far worse in other parts of the world. How do we deal with it?

The New Testament has a fair amount to say on our attitude to governing authorities. We are submit to them (Romans 13), pray for them (1 Timothy 2) and honour them (1 Peter 2). It is worth bearing in mind that the leaders that Paul and Peter had in mind were far from virtuous Christians. But we are to do it for the Lord’s sake according to Peter and because the authorities are instituted by God according to Paul. It is God’s will that there is a system of government and the providence of God puts particular leaders in place. That’s why we will pray for Boris Johnson as part of our service on Sunday and why churches in the States are right to pray for Donald Trump. And the call to honour our leaders means that we must be careful in how we talk about them. At various points over the last few weeks I have mentally deleted sarcastic tweets that were forming in my mind. I suspect I will need to continue to do that- and turn my exasperation into prayers for our Prime Minister. Maybe others will need to do the same?

The above is only half the biblical evidence about our attitude to power. Throughout the Bible there is a strain of speaking truth to power. You see it done respectfully by Daniel and slightly more bluntly by John the Baptist. The most pointed example is Jesus Himself when speaking to Pilate- “You would have no power over me if it were not given to you from above.” (John 19:11). I happened to pose the question in a sermon recently- what would you want to say to Boris Johnson? I think the key point would be to remind him that he has been put in place by God and will be held accountable by God- the true King of the world.

That is relevant because as I have listened to the speeches of the last week, my fear is of hubris. To be fair, he is not unique in that- it has been the tendency of politicians down the ages to make unrealistic promises which is why almost inevitably political careers end in failure. But it needs to be recognised that there is a very small gap between an optimistic, can-do perspective and a pride in human ability that essentially sees the future as being in our hands. It is right for us to say that sort of thing candidly.

3. Prayer for our Country

There is another strand biblically. Yes- God institutes leaders but sometimes for the bringing down of a country as much as raising it up. Mary pretty much sung of that prior to the birth of Jesus. Let’s be honest- the last three years has been humiliating for us as a country- we are regarded as a laughing stock. I may be proved wrong but my suspicion is that this will get worse in the short-term. Should we not see the hand of God in that? Given the evident pride in the country that constantly asserts its independence from God- should we be surprised that we are beginning to look weak and somewhat ridiculous? That means that as well as praying for our Prime Minister we need urgently to pray for the country in which we live- because, in the end, Boris Johnson is neither the solution to nor the cause of the problem. It is much deeper than that. We are not designed to survive as a country on our own. We need the Lord to have mercy on us, that the Gospel might bear fruit in lives and that we would have a deeper humility before God.